Ah, the ways companies will think up to part us from our money. November, already a DVD-heavy month with the first season of Atlantis and the 8th season of SG-1 coming out (the 4th season of Alias comes out at the end of October), is now going to be even heavier—of course, gearing up for xmas—because they are releasing the entire series of Sex and the City in a box set. The problem is that each season of SATC isn’t that expensive, so collecting them isn’t that difficult (you can get them new at Target for about $30 each). But this new box set is supposed to sell for $300! I’ve got all the seasons on DVD already, but I’m sure the new set will include enough stuff to make this die-hard fan want to own it. But I’ll be damned if I’ll pay that much…by first part of next year it should be offered used on Amazon for a nice discount. I mean, really…$300! As if! The entire series of Buffy–all SEVEN seasons!–will be available for $129 on Amazon.

Another interesting DVD announcement is that the first half of Battlestar Galactica’s second season will be out in December. This won’t be annoying IF they release the *second half* of season 2 next year…but what I’m afraid of is that they will release the *entire* second season, thus making the first half-set pointless. And if they do release the season in two parts, that messes up the boxes on the shelf! *sigh* Why doesn’t anyone realize keeping consistent packaging in a DVD series is a *good* thing?! (*cough*HarryPotter*cough*)

Other good upcoming releases: the complete Aeon Flux series and the complete Buffy series (can’t WAIT for this!) .

Ok, I didn’t like the last Star Wars movie. So many things wrong with it. A few good lines in it, but overall I felt it was just too cringe-worthy to enjoy. So I found it hilarious to read this article today on the SyFy site about the new Star Wars TV series in the…

Quickie site update: Still twiddling with the site. Comments are sort of working now, with a popup window. I know it’s hard to see the text in the input boxes; I’m working on it. I haven’t yet commented on last Friday’s Battlestar Galactica mid-season cliffhanger. It was an excellent ep, as good as the previous…

NaNoWriMo is coming up again (National Novel Writing Month, which is November, and the org is about actually writing an entire short novel in a month)…and again, I’m going to try to actually do it, lol. This is my third year trying, this is their seventh year doing it, and 3 and 7 are both…

Via the Unofficial BSG blog, I found this hilarious page—hottie Jamie Bamber & his nearly naked scene in the episode “Final Cut” is featured on the site Fleshbot. Ok, I’ve never heard of Fleshbot, but I can deduce what it’s about, lol. The site is for men (of course), so I guess that explains why… 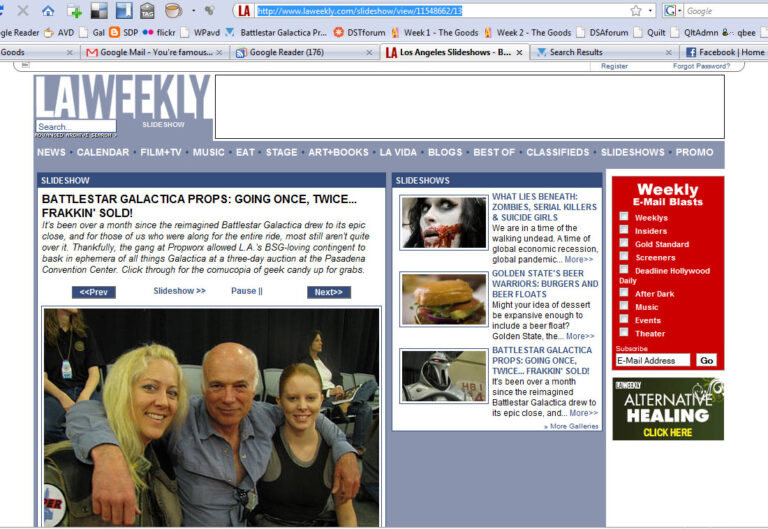 Well, not quite. Or even close, actually, heh. But my pic is in a slideshow on L.A. Weekly (as well as a bunch of pics of my compatriots) of images from last weekend’s Battlestar Galactica prop auction, which I was working out in L.A. The slideshow is here. Here’s a screenshot of the pic: it’s…