Upgraded to WordPress 2.1, and so far so good. I liked this design offered in the WordPress themes site, so I figured I’d use it for now. Tomorrow (er, later today?) I’ll get the other things back on my site and tweak this design’s CSS.

I’ll also be refocusing the site a bit. I want to chronicle the adventures I have begun to do and will be doing in 2007. :-) These include learning to cook (from scratch/gourmet), learning French, adventuring (hiking, kayaking, learning rock climbing). So far my cooking trials have been incredibly tasty, and I’m eagerly trying more. I’ve got a hike planned within the next month, as well as going to the local climbing gym to see Just How Hard it really is. By this time next year I’ll post pics taken from the side of a big wall in Yosemite. Half Dome, perhaps?

Er, ok, maybe not (ever)…but at least I’ll be able to whip up a mean potato & leek soup or Cuban roast pork, and I’ll get some great manatee pics kayaking the Weeki Watchee river.

(the “Flesh and Bone” episode from S1 of BSG)…I made this for roomie: Not that I’m actually snurching anything. Nope. Not me. She posted this pic tonight…it’s of a pen I found at CVS that I had to show her that she had to have, for obvious reasons. There are two leavers at the back… 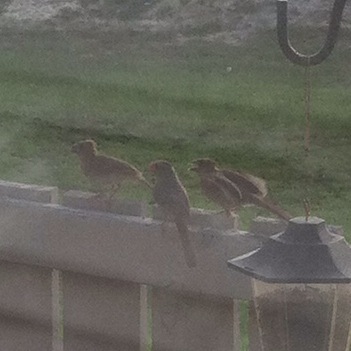 I’m a total geek about wildlife. Always have been. I’m pretty unashamed about it, too; I’ll squeal over cute baby lizards & birds & even snakes if I see them when out & about. One thing I love about where I currently live is that there are lots of turtles around…I constantly see turtles digging…

Yaaaaay! Roomie made yummy chocolate cupcakes last night, I made cinnamon rolls for breakfast, later on I’m meeting up with some great friends at a Mexican restaurant, and at least one of the friends is coming back here to crash tonight and we’re having a “non-slumber” party! Wheee! Yes, my tummy will be furious at…

I’ve got six weeks left of income. We were just told at work that we’ll work/get paid through January, and then we won’t work or be paid in February. Supposedly we’d come back in March on a per diem, but that’s ridiculous–no one can go a month without pay, and then come back to significantly…

Today I finally made the flaxbread recipe I found here, and it turned out delicious! It’s an incredibly simple recipe. I didn’t even use almond meal, just simply the flaxmeal. I can wait to experiment with other flavors, as Kiva suggests. Here’s the “loaf” after it came out of the pan: I didn’t have a…

Tiny rant: Caught something on tv that got me thinking. Apparently there is a big drama right now about how skinny runway models are. I’m surprised this is a “new” drama, since I’ve always thought they were unattractive beanpoles, and I’ve never understood why girls want to look like them. Apparently now they’ve gotten skeletal,…