I’ve wanted a corset for as long as I can remember – well ok, probably since I first saw A Room With A View in my early 20s and wanted to be either Maggie Smith’s character, Cousin Charlotte, or Helene Bonham Carter’s character, Lucy (still want to be both, to this day): 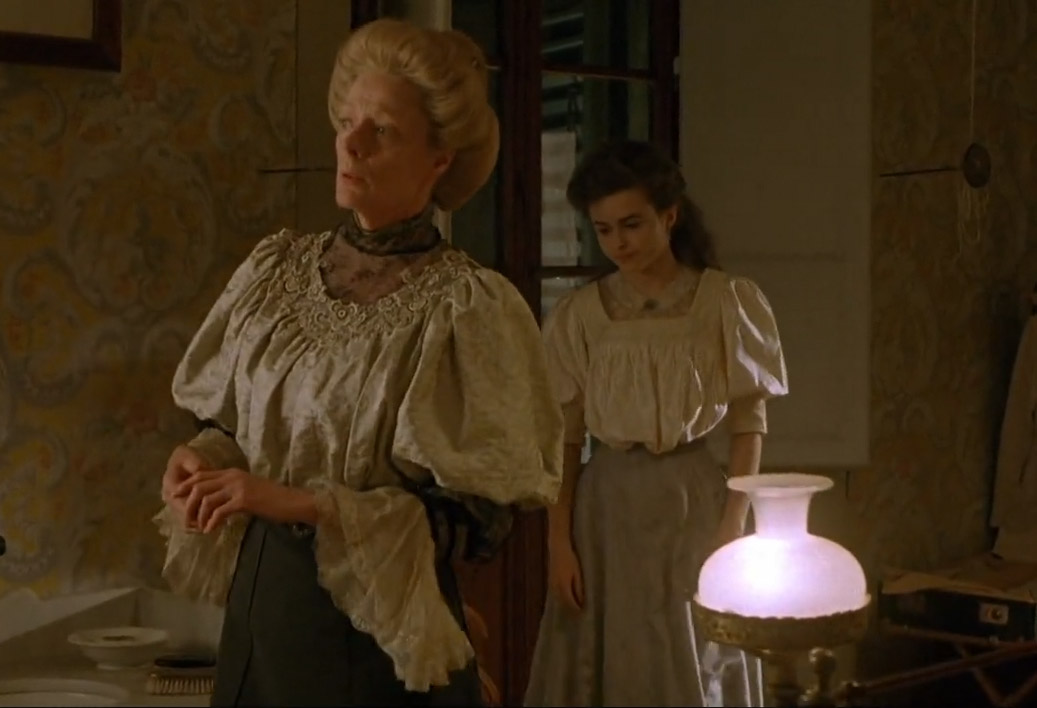 BUT NOT ANY MORE!

Ok, before I explain what happened, let me go on a bit more about corsets. I’ve been going to conventions for years now (my first DragonCon was in 2003), and while I’ve always said I was going to do this or that costume – oooold posts on this blog will even back this up, HA! – I’ve never done more than some BSG stuff or similar.

I’ve always, always wanted to do historical costumes. I dream of a closet filled not with modern fashion, but with Victorian & Edwardian & early 20th century fashion. But for a million reasons, I have never really attempted any (other than a couple of half-hearted tries in years past).

I remember when I first saw corsets for sale at the cons…wow. Just stunning! And, of course, with stunning price tags. I suppose that’s the main reason I never got a corset…I just have never had $300+ to spend on a piece of clothing I’d only wear 1-2 times a year. I’m not the kind of gal who spends a lot on clothes. Well, let me clarify that: If I love an item, and spend a lot on it, then I will wear it a LOT. Because I love it! I cannot fathom spending a lot on wearables and then, you know, not wearing them. And everyone always said that you had to buy a custom corset or else – the cheap ones, off the rack, were pointless & cause problems & blah blah blah. So while all the gorgeous corsets made me drool, I just never had the money to indulge in one, and I remained corsetless.

But over the past year or two, I’ve been more & more interested in having corsets to wear as my normal foundational garment; I’m sick of bras. I thought I was probably incredibly silly to want a corset for daily wear – taking my love of costume dramas too far – because who does that?! But then I’d giggle to myself & think, no one would ever have to know. It could be one of my “eccentricities.” Heh.

So then I went poking around online, and…yeah, I’m not eccentric. At all. There are a LOT of women already wearing corsets daily & have been doing so for a long time. I’m quite behind the curve.

But then I got excited all over again…wow, I could really do this! Many others do, I could get more info! So much corseting fun, so much to learn, so many historical styles! Wheeee!

However, prices have still been steep, and I still don’t want to spend a lot if I’m not even sure if I’ll actually like corseting. (I mean, I will though.) (Of course maybe I won’t, who knows?) (But I will.)

So I said ok, I’ll plan to maybe go get measured at some point, try some corsets on, that kind of thing (and no, I’ve never even tried one on!).

And then today…while hunting on Amazon for other stuff, I came across a cute corset, seemed sort of costume-y…but I said hmmm, interesting. Then I looked around at some other links, searched a bit.

A plain, beige-color-wear-it-under-clothing overbust (which I wanted) corset.

Reader, I bought it.

(Apologies to Bronte for twisting her words, hahaha.)

So ok, yes, it’s a cheap off-the-rack corset. As in REALLY, REALLY CHEAP. It’s probably going to fall apart quickly. It may not lace up properly. It might not fit. It might completely suck as an Actual Corset.

Or maybe…just maybe…it’ll be the perfect Starter Corset. The perfect piece to let me dip my toe (my waist?) into this fun new world. To let me get a taste of what I’m getting myself into (literally).

I’ll report back here in a few days once it arrives and I try it on. I’ll be crossing all fingers & toes that it will fit & that I can actually wear it a bit each day.

I know it won’t hold a candle to a bespoke corset, but for $13, I’ll take it, and hopefully, have some fun sashaying around pretending to be Cousin Charlotte. :)